When the Mississippi Flag Commission first met back in July, they had over 3,000 submissions to review. Today, they have selected the ìNew Magnolia Flagî as the proposed new state flag for Mississippi following the removal of the now-retired banner that had flown above the state since 1894.Ý

The nine-member commission voted 8-1 to select the proposed design, which also won the non-binding public poll by a wide margin, over the ìGreat River Flag.î

The flag, originally designed by Kara Giles, Sue Anna Joe, and Rocky VaughanÝwith tweaks made by vexillologist Clay Moss, was created ìto represent the forward progression of Mississippiî with the magnolia symbolizing the ìstate and the hospitality of our citizens.î

The proposed design will now be submitted to the Secretary of Stateís Office before being placed on the November 3rd ballot for Mississippians to vote upon.

A more detailed description of the design from the Department of Archives and History can be seen below:

The circle of twenty stars represents Mississippi as the twentieth state of the United States of America and is anchored by the gold five-point star, which stands alone. This star represents our first peoples, the indigenous Native American tribes of the land that would become Mississippi.Ý

The color blue in the main field of the flag echoes the blue of the American flag, representing vigilance, justice, perseverance, while the bands of red represent hardiness and valor. The gold lines and the gold stamen of the New Magnolia are a nod to the rich cultural history of Mississippi, specifically the visual arts, literature, music, and performing arts to originate in our state.î

If the proposal does not receive a majority of the vote, the commission will reconvene and select a new design ahead of a 2021 election.Ý 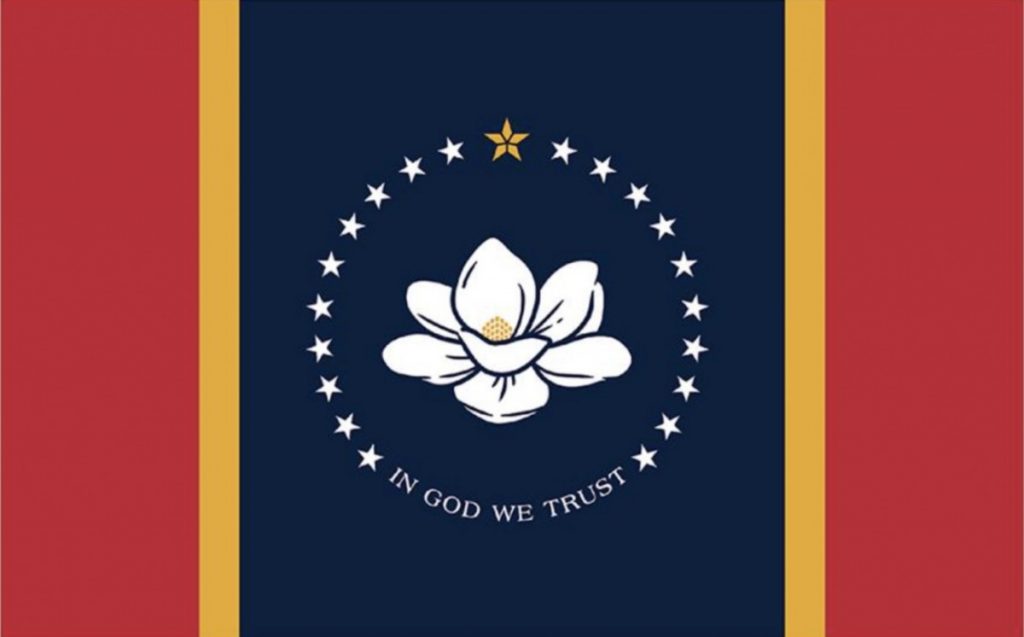