Sometimes Airmen forget how small and connected the Air Force actually is. Nearly every Airman is connected to another Airman from relationships made at prior assignments or training.

Although the Air Force is one giant network of people, it’s not common for two members from the same hometown to end up in a situation like this one.

Stegeman and Rackers both come from a relatively small town in Missouri, called Jefferson City. They both graduated from Helias High School.

“We grew up not too far from one another,” Stegeman said. “My in-laws are actually next-door neighbors to his parents. Word travels fast in a small town and once I found out he was going to the academy, I kept track of him a little more closely.”

After high school, Stegeman and Rackers both went to the U.S. Air Force Academy at different points in their lives and were selected for pilot training. Stegeman graduated from the academy in 2012, and Rackers in 2018. They would meet again during pilot training at Columbus Air Force Base, Mississippi.

Today, Stegeman and Rackers are both a part of the IFF course at the 49th FTS. Stegeman is an instructor pilot and Rackers was once a student pilot, now a graduate.

When asked what it is like to mentor and train someone from his hometown, Stegeman said it is a special opportunity.

“I always hope all of my wingmen pass, but having the comradery of having someone from your hometown increases your motivation for them to pass even more,” Stegeman said. “Now that he’s finished with IFF, I have the opportunity of being more of a mentor, helping him with his next PCS and assigned aircraft.”

Stegeman said throughout mentoring, his hope is to show Rackers some of the lessons he has learned.

Rackers said he is thankful to have someone from his hometown teach him about flying and his career.

“It’s been very helpful having him around,” Rackers said. “He can relate to me a lot better and he’s taken an interest in my training. I’ve gotten to fly with him and he has passed on to me all of the lessons he’s learned.”

Rackers said his biggest takeaway from his experience is by thinking how much of a coincidence it is to have an instructor pilot from his hometown, as well as the lessons learned, the flying experience and the relationship he has formed.

“It’s just an awesome coincidence,” he said. “In such a big air force and big world, being able to meet up here is crazy. Him being able to pass on his lessons and wisdom as a fighter pilot to the next generation was a great experience.” 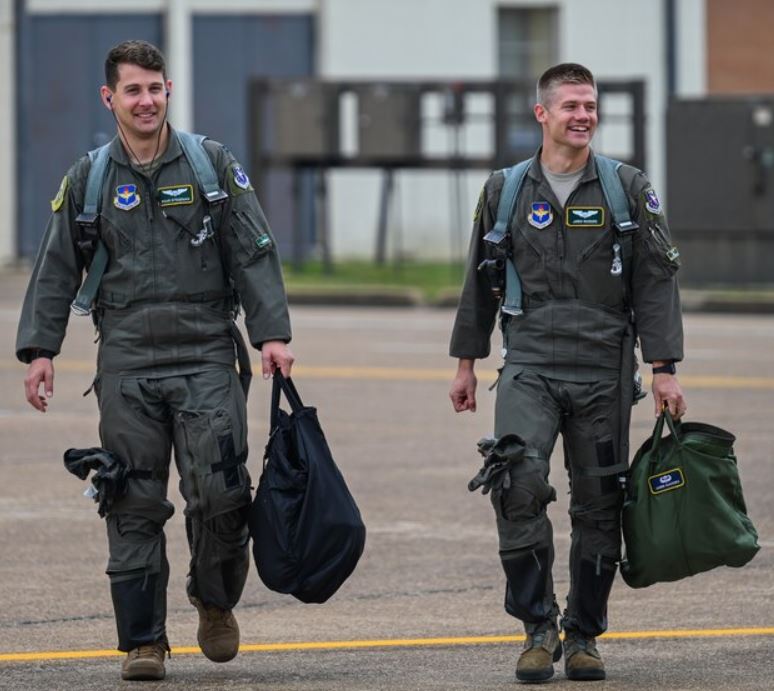