With COVID-19 cases continuing to surge among Mississippi’s younger population, Governor Tate Reeves is set to take additional action by placing restrictions on bars across the state.

During today’s press briefing, Governor Reeves said while many Mississippians have begun taking the spread of the virus more seriously in recent weeks, there are still those who are choosing to refrain from adhering to social distancing guidelines.

“We have to make determinations as to why those two groups are the fastest-growing number of increases and what can we do to curb it. Certainly, when you talk about that 18-29 age group, you’re talking about bars,” the governor said.

He went on to explain that the order, likely to be issued Friday, will be statewide. While no specifics on the order were given, Governor Reeves said that they “do not want to” shut down bars like they have in Texas, Florida and other states.

Currently, 23 counties are included in the executive order placing hotspot areas under mask mandates and stricter social distancing guidelines. Governor Reeves said that additional counties will be added to that order Friday as well.

Officials continue to worry that, while the risk of hospitalization or death for that younger population may be low, those cases could spread to the more vulnerable population.

“Their survival rates are far greater than someone who is over the age of 80 or 90, but when you look at it from our perspective, we don’t just look at what it means to you — the first iteration of an individual who contracts the virus. While that’s important, it’s not the only thing that’s important,” the governor noted. “It’s when that 27-year-old contracts the virus, then goes home and gives it to a mom or dad. Maybe that mom or dad is going to be perfectly fine as well because they’re healthy, but what happens if that mom or dad is a primary care provider in a nursing home and they take the virus — because of this community transmission — into that nursing home?”

With every 1,000 cases leading to around 170 hospitalizations, Dr. Dobbs recently stated that transmission needs to slow in order to ensure the system’s viability. With the exception of today’s 982 cases, Mississippi has seen over 1,000 cases each day this week. So, how can everyone do their part? Dr. Dobbs has a simple answer.

“It’s in our power to change it,” he said. “If everyone would just behave for two weeks, we’d see a difference, but everybody wants to go do what we did before,” he said. “Now is the time to stay at home, wear a mask and stay away from people, that’s it.”

Governor Reeves did reaffirm his stance on students safely returning to classrooms with the school year set to begin in August.

“Our districts have had months and months to come up with plans and to think outside the box to come up with innovative ideas on ways in which they can safely get back in the classroom.”

He suggested the use of hybrid schedules, reducing class sizes, bringing different grades into the building at different times, and several other options. Individual school districts must submit their reopening plan to the Department of Education by the end of the month.

Below, you can watch today’s complete press briefing: 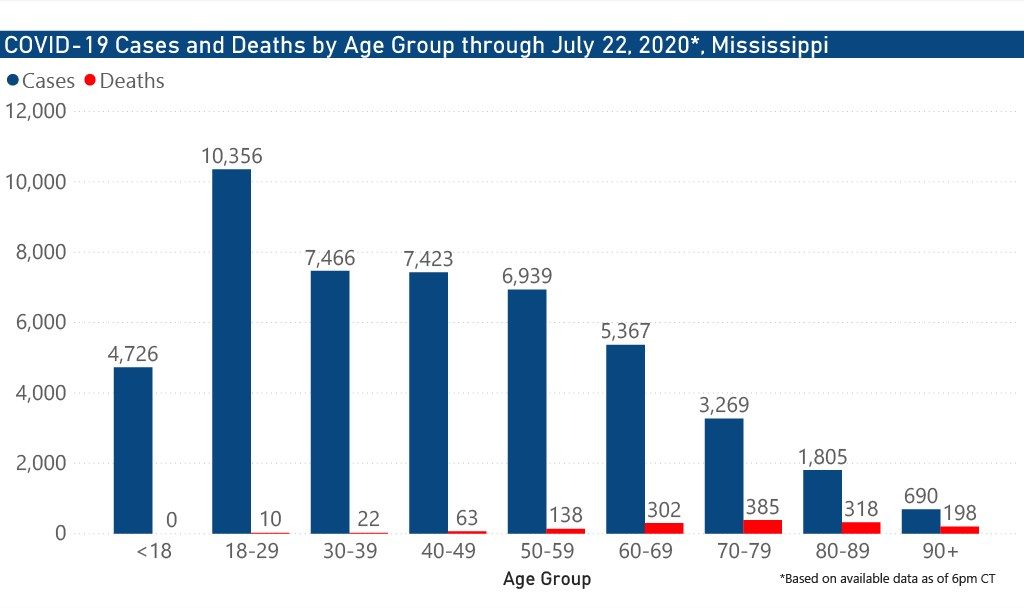